Passing On The Narcoleptic Girlfriend 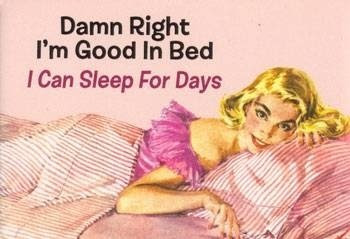 For some reason, I've always secretly thought it'd be cool to know someone with narcolepsy. That sounds mean, I know, but you can't really be held responsible for random things that enter your head. Can you? Anyway, it's not like I'd wish narcolepsy on somebody. She'd already be narcoleptic when I met her.

NOT a girlfriend. I wouldn't want a narcoleptic girlfriend. Now I'm wishing I hadn't even started this whole subject, because the deeper we get into it, the more I sound like a jerk. Maybe I've hit upon a real pocket of intolerance in myself here. I mean, I can imagine there are lots of people riding around with narcolepsy support ribbons on their cars who'd find me downright politically incorrect and prejudiced for being willing to hang out with a narcoleptic, yet not wanting to actually take a chance on having sex with one.

Dang. Now I'm mentally designing the narcolepsy support ribbon. It should have a deep, velvet black background with diamondy stars all over it and a half-moon with its eyes closed. And of course it would say I Support Narcolepsy.

Anyway, is it so wrong to be honest about this? I mean, I wonder how many narcolepsy supporters would have to admit they really wouldn't care to have a girlfriend with Tourette's syndrome, for example? Probably many.

And all those people would be considered intolerant by the Tourettes supporters, conspicuously recognizable by their signature bright yellow and red ribbons that blare Fuck, Yes, I Support Tourette's.

Anyway, for some reason, I still think it'd be cool to know somebody who has narcolepsy.