The 69th Law of Thermodynamics - Hotness is Relative 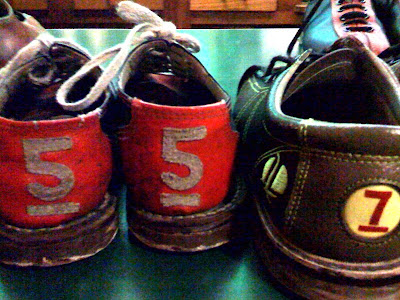 Right away, I knew what she meant. That special blend of alley varnish, concession stand and ball wax is a hard aroma to forget. And, around here, when that smell sneaks up on you in a non-bowling situation it usually means Claire Norma Jeeter-Smith isn't far away. For some reason, Claire Norma took the idea into her head a few years ago that wearing bowling shoes is the ultimate fashion statement. Real bowling shoes. Old rentals she bought from the actual bowling alley. Anyway, if there's anything a couple of optimists like Starr Ann and I are willing to admit is hopeless, it's that it's possible to get the bowling alley smell out of real bowling alley shoes.

So the minute Starr Ann said that, we both started looking around for Claire Norma. I was the one to spot her standing alone over by the edge of the dance floor.

Claire Norma's build is pretty darn proportional to a pear - short and stubby, real broad and round at the base, sloping narrowly upward to the shoulders, with tightly curled short hair that makes her head keep that narrowing effect going all the way to the top. If Claire Norma sounds like the kinda girl you'd pass right over as you scope out the bar, then I guess I described her pretty accurately.

Which brings me to an uncomfortable subject. At least, it's one that gets Starr Ann and me squirming a little bit. Does our reaction, or lack thereof, to Claire Norma make us bad lesbians? I mean, if we were any kind of upright lesbians, wouldn't we find all women beautiful? And not just on the inside?

"There she is, Starr Ann, over by the dance floor."

Starr Ann said, "Seems kinda far off for us to be picking up the shoes this strong."

I had to agree with that.

Well, just as Starr Ann and I were about to head over there like we always do, so Claire Norma wouldn't be all by herself, we both realized Janie James was standing right next to us. Your eyes wouldn't exactly glide past Janie as you scoped out a bar. Just sayin'.

Anyway, Janie nodded real polite as we made way for her to get through carrying two ice cold beers, with a big smile fixed on a point somewhere near the edge of the dance floor, and wearing an aromatic pair of bowling shoes.

Dang. Hotness is counterintuitive.
Posted by Margo Moon at 10:03 PM