Down On The Night River 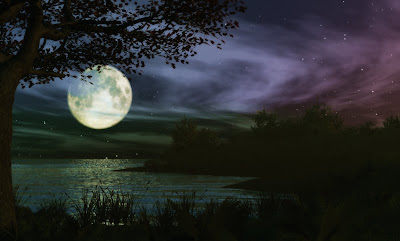 The reason my best friend Starr Ann and I got fired from that bookstore when we were younger is that whenever someone came up to the Customer Service Desk and asked for assistance finding the Self-Help section, Starr Ann would just wink and say, "You can count on me not to show you."

Even way back then I didn't get mad at Starr Ann for losing her job, which meant of course that I lost mine because I followed her right out the door. No, the consequences didn't matter nearly as much as my appreciation for the natural working of Starr Ann's mind.

Like the way you can’t exactly say that Starr Ann divides her days into distinct periods of sleep and wakefulness. In fact, a lot of the boundaries and borders most of us automatically see and stay within are kinda transparent to Starr Ann. Well, not exactly transparent, but let's just say they're real shapeless and much less solid.

Anyway, if you loosen up on the reins completely and give Starr Ann her head, things you normally think are separate start running together and it begins to dawn on you just how far off the beaten path Starr Ann travels. Wait, let me take that back. What starts to dawn on you is how Starr Ann sails right over the rough as well as the worn paths, apparently without realizing there are obstacles along either.

So, what got me going on this in the first place was the way Starr Ann can sometime kinda blend being asleep and being awake. Like last night.

Last night, Starr Ann came to my room, cuddled in beside me and said, "You awake?"

And knowing Starr Ann like I do, her answer of "I'm not sure" didn't surprise me one bit.

When she goes into one of these states of grace, it's like Starr Ann is able to take the training wheels off her consciousness, and she's fearlessly hurtling through her moments, totally accepting each second for its own self. I think it's what J. D. Salinger, in Frannie and Zooey, calls unlearning the differences.

I've tried my best to get to that state, but I've never really done it the justice Starr Ann does. Mainly, I don't think it's someplace you can get to through thinking. Somehow, you have to open up a back door for that kind of enlightenment to enter by.

Since I've never been as good at getting onto that plane as Starr Ann is, last night I waited for her breath to get into sleeping rhythm and asked her, "Starr Ann, do you have some secret or trick or anything for learning how to unlearn the differences?"

Just as regular as anything, Starr Ann said, "Margo, do you remember that set of encyclopedias the orphanage had when I first got there?"

"The light green ones with the maroon lettering on the spines?"

Starr Ann said, "It was the set that had two S volumes."

I said, "Yeah, I think I vaguely remember that."

"Margo, there are only three things I never told you about in our entire time growing up together. One of them is that I was scared to death of the first of those two S volumes."

To my shame, I still wasn't feeling all that much on an elevated plane and I couldn't help it that the first thing out of my mouth was, "Are you going to tell me the other two things after you finish with this encyclopedia one?"

Well, Miss State of Grace just went on with, "I was so terribly afraid of snakes when I was little, and that first volume ended with the entry on Snakes, including pictures that just freaked me all the way out."

As I started wondering if maybe one of the other things Starr Ann never told me about had anything to do with my first girlfriend, Shania, Starr Ann continued, "I started thinking of that volume as the Bad S volume and the other one, the one without Snakes, as the Good S volume. And it didn't stop there. It wasn't long before I began to hate all the words in the Bad S volume and I'd do anything I could think of to avoid them."

I took that opportunity to ask, real nice, "Did you by any chance ever wish you could look up the word 'Shania,' but were unable to because of it being in the Bad S volume?"

At times like these, Starr Ann isn't all that keen on answering direct questions.

She said, "Then one day, that old encyclopedia was gone, replaced by the one they still had when we left. Remember? Brown leather covers and gold lettering?"

"Well, I braced myself and went right to the S's to find out which volume I had to be afraid of, to see whether Snakes ended up in the first half or the second half of the S's. But there weren't two volumes. There was just the one, and I had to realize that unless I wanted to give up Sun worship...Stetson hat...Barbara Stanwyck..."

"...just like I'd already given up Sand fox...Secret code...and all the other wonderful S words, I had to accept Snakes right there in the middle of them."

Not long after that, Starr Ann's breathing got all even again, but I didn't get a bit of sleep. Then a little before dawn, Starr Ann threw her leg over me and gave me a real nice lying down hug then got up and started putting on her chaps. She looked so sweet climbing out my window into the moonlight, I forgot to bother her with any more questions.

Soon after she left, my room picked up a faint glow as the barn lights went on, and I just knew Starr Ann was down there making over the horses, probably whispering to them all about those other two things she never told me.

Ordinarily, I'd just automatically come out and say whether I sneaked down there to try and overhear what she told them. But since I know Starr Ann (hi, Starr Ann) will be reading this, I think I'll deliberately keep that information to myself, just to demonstrate that if one cowgirl can have a few things she never told another cowgirl, then the other cowgirl can too. Just sayin'.
Posted by Margo Moon at 11:49 AM