Member Fatigue (or) How Does Your Garden Grow? 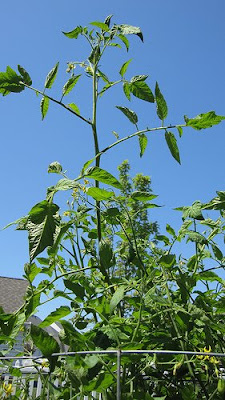 An innovator in nearly everything she does, my best friend Starr Ann has some unusual, yet highly successful, gardening techniques. That's why I encouraged her to enter the incredibly popular and competitive annual tomato growing contest in our town this summer.

Only thing is, with Starr Ann, one thing kinda leads to another and the main themes dominating her brain tend to get all braided together sometime. Like last month, right before I mentioned the tomato contest, she was all up in the air over how many penis emails were still penetrating the firewalls and spam-fighting filters she'd put on our computers. That last filter, E-Zipper, had shown such promise.

Anyway, around the same time, she also got a zero-interest-for-nine-months credit card offer in one of her post office boxes. You know, one of those alluring deals where a credit card company dangles money in front of you, hoping you'll borrow it and default in some way so they can slap on a sky-high interest rate you'll never get yourself out from under? But this was an especially innerestin' offer, as it was made out to one of the fake identities Starr Ann created for her voter fraud scheme back in 2004 when she decided you had to use Bush tactics to fight Bush.

So here's where the braiding together of two aggravations comes into play. Starr Ann replied to each and every penile enhancement email in her inbox. And guess how she paid for it all? That's right. She charged up about eight thousand dollars worth of penile assistance with that fake credit card. Now if you're thinking there's no way Starr Ann could pull off such a scam without getting caught, then you just haven't been paying attention to Starr Ann's talents.

I never doubted we were in for some major deliveries, and sure enough, starting about two weeks ago, Starr Ann would leave the house early in the morning and come riding in before sunset, with her saddle bags bulging like...well, you know.

Which brings me to why I encouraged her to enter that tomato growing contest. Thought it might take Starr Ann's mind off of her latest little subversive hobby. And bless her heart, she smiled real big when I mentioned the contest and said, "Why, Margo, what a perfect idea!"

Right away, she called the contest organizer who was real excited about Starr Ann signing up, because apparently the same people competed each and every year, and they were frankly suffering from a little member fatigue.

Anyway, like I said, Starr Ann's an innovative gardener. But the very next day after she entered that contest, her tomato plants got to looking extraordinary. By the end of the week, when the contest judges were due to drop by for a preliminary look-see, those plants were reaching so proudly for the sky that Starr Ann had actually removed the stakes, saying, "Margo, I don't believe there'll be any further need to prop these babies up."

Well, that shoulda got my suspicions aroused, but of course it didn't.

You wouldn't believe how impressed the judges were. They kept making comments like, "Never saw such stalks!" and "Those're big around as baseball bats!" and "Look at how the tomatoes are all hanging in pairs!" The one real bull-dykey judge even stayed behind when the others left and told Starr Ann that when it came time to whack those suckers down to make room for the cold crop, she'd be happy to bring her sickle over and do it by hand.

That was the comment that finally tipped me off. When the judges were good and gone, I said, "Give it to me straight, Starr Ann. What you been feeding these tomatoes?"

Well, Starr Ann got that one look on her face. The one where you just know she knows you've caught her doing something super tricky. Then she just smiled and said, "Now Margo, you know how I always try not tell you enough details about some things, in order to keep you legally in the clear?"

I said, "Yep I do Starr Ann, and I appreciate that, but just give me a hint, okay?"

Well, Starr Ann circulated through her garden a little bit, pulling up a couple of tiny weeds, picking a few yellowing tomato leaves, and just generally thinking. Then she said, real casual, "Wonder how many tomatoes it'd take to break even if, say, somebody used about eight thousand dollars worth of fertilizer on 'em."
Posted by Margo Moon at 12:40 PM