Grub For The Soul 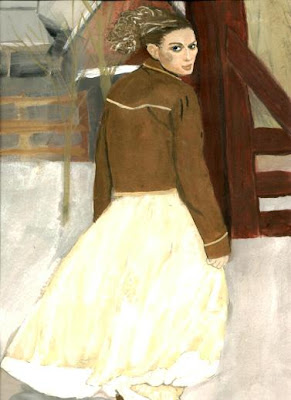 My best friend Starr Ann and I were a little gung ho at the outset of our cattle drive, I guess, because we made a pact to stop at no restaurants along the whole trail. Not even a health food store.

Not far across the Indiana line, I remembered Sanra, an innerestin' beauty from New Albany who'd once spent a whole summer working her brown-eyed magic on Starr Ann.

I said, "How many more nights you think we can eat campfire beans and bread for supper before we lose the will to live, Starr Ann?"

Starr Ann gave my saddle bag, the one with our food in it, a real sad look and said, "None."

Raising up in my saddle and scouting in all directions, I said, "Well, we're the ones in charge of this cattle drive, and I don't see any adults around to tell us we can't interpret our own rules any way we see fit."

That got a smile. "I'm listening, Margo."

"Well, if I'm not mistaken, Sanra Anerson lives not too far from here, doesn't she? So, what's to keep us from stopping by to say hello? Then, if she should invite us to supper or somethin', it'd only be polite to accept. A private home is neither a restaurant nor a food store. Just sayin'."

Starr Ann's so phony when she pretends to be weighing something that I know she's already made up her mind about. Anyway, I had to endure about eight minutes of fake indecision on her part before she said she was all in favor of paying Sanra a visit.

On the way, Starr Ann asked me if I recalled how the Anerson family were known for their idiosyncrasies. Like the way the parents omitted all the d's from their kids' names. Like the way Sanra's little brother Ominic used to eat wax paper.

That brought back a bunch of Sanra stuff, and I had to laugh as I added, "Yeah, and the way Sanra would pick the stupidest safewords, like 'baby' or 'Oh, God,' that were guaranteed to cause all kinds of weird misunderstandings." When Starr Ann didn't chuckle along with me about that, I said, "I cannot be held responsible for the fact that your bedroom is a mere twenty feet from mine, Starr Ann."

She couldn't argue with that, so she just changed the subject. "I wonder what she's having for supper tonight. The supper she'll surely invite us to join her for."

"Dang, Starr Ann, what if it's mashed potatoes with gobs of butter?"

"No, I can't say as I remember anything about that. Maybe you dreamed it, Starr Ann. Anyway, I'm thinking if it's not mashed potatoes, it might be oven-baked macaroni and cheese with the top cheese all brown and crusty."

"Or a big pot of vegetable soup with homemade bread."

"Or she might be having lasagna with hot Italian bread and a big green salad."

The moonless night had gone fully to black by the time we reached Sanra's place and I can't really express how disappointed we were to find that the inside of the house was just as dark as the outside.

I said, "Not much hope anything's cooking inside there, Starr Ann. Doesn't even look like Sanra's home."

All we could do for a few minutes was sit there and let it all sink in, realizing there was nothing to do but turn the horses around and head for that camping spot we'd passed about twenty minutes back. We felt like a couple of robots setting up camp that night - untacking the horses, feeding them, starting the fire, and preparing the dreaded beans and bread.

Neither of us had said a word for a long time, when just as we were about to start our meal, Starr Ann said, "What in the world is wrong with us, Margo!"

That seemed elementary. I ventured, "We're disappointed because we were all set for some of Sanra's delicious cooking and now we're having to choke down yet another plateful of beans and bread?"

Right then, Starr Ann's voice hit that one pitch, the one where I just know she's had herself an insight and she's bound and determined to make me have it too. She said, "And how pitiful is that? Don't you remember back when the economic crisis hit and we got up a big head of steam to face whatever the future might hold? Remember how we were ready to chop wood and carry water if that's what it took to get by? Remember how when the Recession or Depression arrived we thought it might bring with it a much needed correction to our society's trajectory? Remember how we were going to call it the Enlightenment?"

I was starting to see where this was going. "Yes I do, Starr Ann."

"Well, just because it looks like Wall Street isn't going to change, corporations will forever run our country, and having decent folks in the White House isn't enough to bring real change, all that doesn't mean you and I have to abandon our ideals. We've squeaked by with a whole lot less hardship than most people this past year, and here we are, on this great big voluntary adventure of a cattle drive, getting all discouraged over the food. Margo, are we cowgirls or not?"

I loaded a tin plate high with hot beans and broke off a nice chunk of the bread, handed it to Starr Ann and fixed another one for me. I took a big bite of beans and with my mouth full, I said, "We're cowgirls."