Moment By Moment, In Rubicon Time 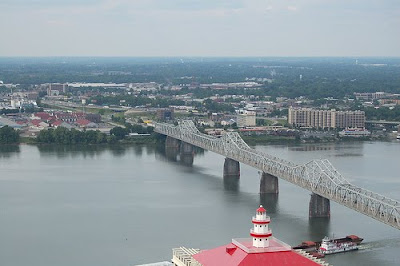 To me and my best friend Starr Ann, crossing a bridge is as full of romance as opening a letter, dropping off to sleep, abandoning a desire, making eye contact with a stray dog or performing any act guaranteed to put you in a whole 'nother place.

Three weeks into our cattle drive, Starr Ann and I reached the Louisville side of the Ohio and stopped the horses for a few seconds to gaze down the long open air tunnel of cantilevered trusses. Starr Ann said, "I love the way a bridge is a hundred percent journey." Then she kissed at the horses to start them across.

We shifted slightly in our saddles as the horses angled upward with the bridge's gentle camber. Once clear of the bank below, we felt the cool push of river wind against our faces and heard it skim across the steel, concrete and cable it barely noticed in its endless hurry, which was eastward that morning.

At about the peak of the arch the wind picked up some, but Trickster and Oatmeal tucked their natural urge to quicken and stayed steady as anything, even as the level center started sloping down toward the Indiana bank. Then, with just a quarter of the bridge left, an adrenaline charge hit the horses right before we both noticed a man hanging way over the bridge rail up ahead. The horses were pent up bad and dancing hard by the time we drew up even with the man and saw the other pair of hands he was clasping over that railing, all four sets of knuckles strained white with the effort of pulling against the point of no return.

From what we can remember, both horses took the bit in their teeth and ran the rest of the way off that bridge as fast as they could. We finally reached the bright yellow welcome center on the Indiana side, jumped off the horses before they were all the way stopped, and ran inside breathing hard, talking way too loud and way too fast.

Starr Ann took a tight grip on both of my forearms and said, "We have to go back! We have to help!"

But neither of us budged.

The girl behind the counter calmly turned off the soap opera she'd been watching. "Are you real cowgirls?"

We ran over to the counter and still out of breath, Starr Ann said, "There's a man on the bridge! He's..."

The girl waved her hand toward the door and said, "Happens all the time. Police are already up there. If you came over the bridge, you must have passed right by the squad cars. So, you're real cowgirls, right?"

I said, "We're on a cattle drive. Are you sure? I don't think we saw anything like police up there."

She said, "Positive," and straining her neck over toward the window, she bobbed her head in a counting motion. "Looks like five blue lights flashing up there. At least. Cattle drive?" She leaned over toward the other window. "I don't see no cattle. Oh, God, they must be in the back parking lot! So, how long you been on the trail? This is so cool!"

Starr Ann said, "It's hard to explain, but there are no actual cattle."

The girl narrowed her eyes for a second before smiling real big. "Then how come you smell like cows? And I mean that as a compliment."

Well, that thrilled this kid no end. "Only real cowgirls," she gave Starr Ann a pointed look, "with actual cattle, could sort out cow smell from horse."

Very graciously, Starr Ann motioned toward the door. "Feel free to check out back. No cows."

For a second she looked like she wanted to go look, but she didn't move. "No, you're real cowgirls, on a real cattle drive, and you've got a herd of cows out there all right, not a doubt in my mind about that." Then she went back to her program.

Starr Ann and I stepped back outside, mounted up, and rode North with the bridge at our backs, never turning to make sure about those blue flashing lights.
Posted by Margo Moon at 3:01 AM