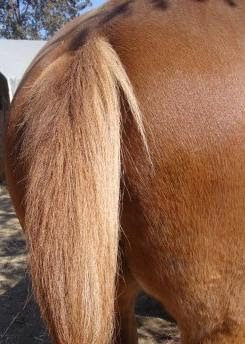 My best friend Starr Ann thought it'd be cool to measure stuff all along our cattle drive, so before we set off she hopped on the Internet and ordered these gadgets for the horses to wear. They're supposed to count the number of steps the horse takes and calculate distance based on the length of the horse's average stride. I think she pretty much wasted her money, but you can't really tell Starr Ann a thing isn't going to work once she gets it in her head that it is.

So, as we bade farewell to Jodie and double-checked our bedrolls, Starr Ann got out the instructions and affixed one of the hoofometers to Oatmeal's tail.

I said, "Starr Ann, that can't be right. He's gonna poop right on that thing if you hang it there."

Any other time, Starr Ann would be the first one to tear up a set of written instructions, but since she was bound and determined these hoofometers were just what every cattle drive needed, she pointed to the diagram. Sure enough, it looked like she'd put it in the right place, but I still had to repeat, "Gonna poop right on it."

Then she just stood there not moving one muscle until I put the other hoofometer on Trickster.

It was around sunset when we got started, which prolly sounds like the exact opposite time of the day for a cattle drive to begin, but that part was my idea. I didn't want to be too far from the house when we bedded down for the first time, just in case we discovered we'd forgotten something, or if maybe sleeping on a bedroll under an ocean full of stars wasn't quite as cool as you'd imagine, or if it rained or something.

When we reached a spot that looked good for making camp, first thing Starr Ann did was check Oatmeal's hoofometer. Once she got the thing cleaned off good enough to read it, she looked up and asked me what Trickster's had registered.

As I checked Trickster's device I asked, "Did they charge you extra for this special poop adherent material, Starr Ann? Because I never really saw horseshit cling to anything quite like this." Then, since we were on the brink of an exciting, once in a lifetime adventure and I sure didn't want Starr Ann to have an attitude the whole time, I said, "Actually, it's kinda neat to think we'll be able to record the distance we travel each day. Okay, here we go, mine says 9 furlongs. Hey! Cute the way the units are furlongs."

I thought Starr Ann would be glad I had something good to say about her hoofometers, but she just got this deflated look on her face and said, "This one has 12 furlongs."

Dang! I hate to see that girl disappointed. So, all through setting up our campfire and cooking our meager supper of bread and beans, all through unrolling our bedrolls, I thought up reasons for that 3 furlong discrepancy - like how Starr Ann and Oatmeal had crossed the creek a little ways down from Trickster and me, which could have introduced several more steps to their total, the fact that Oatmeal's path around that one slope was lower and so longer than the path closer to the top, and a couple of other pieces of thin evidence that they really could have traveled that much farther than we did.

The hoofometers are junk, no doubt about that. But somehow, in the course of that first night on the trail, we'd switched around from Starr Ann defending the stupid things and me being all skeptical, to me coming up with every excuse I could think of in defense of their accuracy just to keep Starr Ann from feeling disillusioned.

I guess from the get-go our cattle drive had a little more codependency than you'd usually expect to find out on the frontier. Then again, there's a fine line between codependency and plain old loving somebody more than you love yourself.
Posted by Margo Moon at 8:00 PM