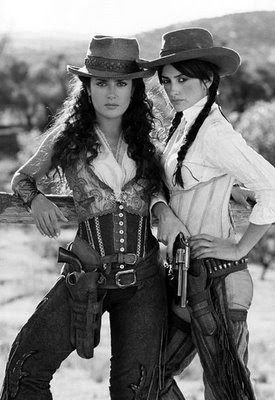 My best friend Starr Ann (hi, Starr Ann) came sauntering in this afternoon with that one look on her face. The one where you just know she's about to grab the reins and take the horses in a whole 'nother direction.

She waited until Jodie got back from the kitchen before telling us her news. Seems there's a church just south of here planning on having what they're calling an "Open Carry" church service this weekend. Yep, that's exactly what it sounds like - a church full of gun-totin' religious people.

Starr Ann even had a flyer, which I highly recommend clicking on to enjoy the full effect of the chamber artistically overlaid on the parchmenty copy of The United States Constitution: 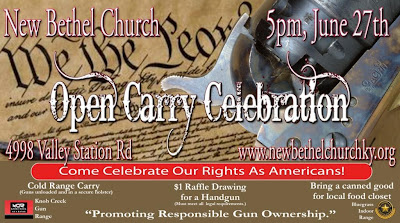 Anyway, Jodie, Starr Ann and I were having a good, cynical laugh over the whole thing when Starr Ann's laugh kinda wound down far enough for her to say, "We're definitely going to attend."

Jodie got real serious, real fast and objected, "Honey, Darlin', this is going to involve many rednecks, with guns, in an enclosed space. Our goal should be to remain outside that space. See?"

Poor Jodie. She's only been Starr Ann's sweetheart for a year and a half, so while she's great at picking up on the nuances of Starr Ann's disposition, she hasn't quite mastered the sub-nuances yet, which is exactly why as Starr Ann's lifelong best friend, I grasped before Jodie did that there was absolutely nothing on the Goddess's green earth gonna stop Starr Ann from going to church with those scary Second Amendment people.

Naturally, we couldn't allow her to go alone, so we finally said okay.

Starr Ann's reply was a huge smile and a hug for both of us, followed by, "Now, let's saddle up the horses and head on over to the toy store."

From the smiles on our faces, she realized right away we'd taken her wrong, and she amended that to, "The one where they sell children's toys."

Turns out, Starr Ann not only wants us to show up in all our lesbian cowgirl glory, she wants us to be packing. Guns. Toy guns.

Once Jodie and I just gave ourselves up to the whole idea, we kinda started having fun with it. Jodie went with a traditional fake-leather holster, the kind that ties around the thigh, and shiny silver six-shooters. I decided on a bright pink water pistol that I'm not sure what yet, but I think maybe I'm gonna load it with something a little more original than plain water. Of course, Starr Ann just had to have the most authentic looking toy AK-47 anybody ever saw in their life.

So, we're all set for church on Saturday. Wish us luck. 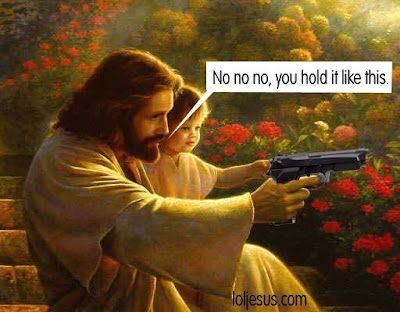